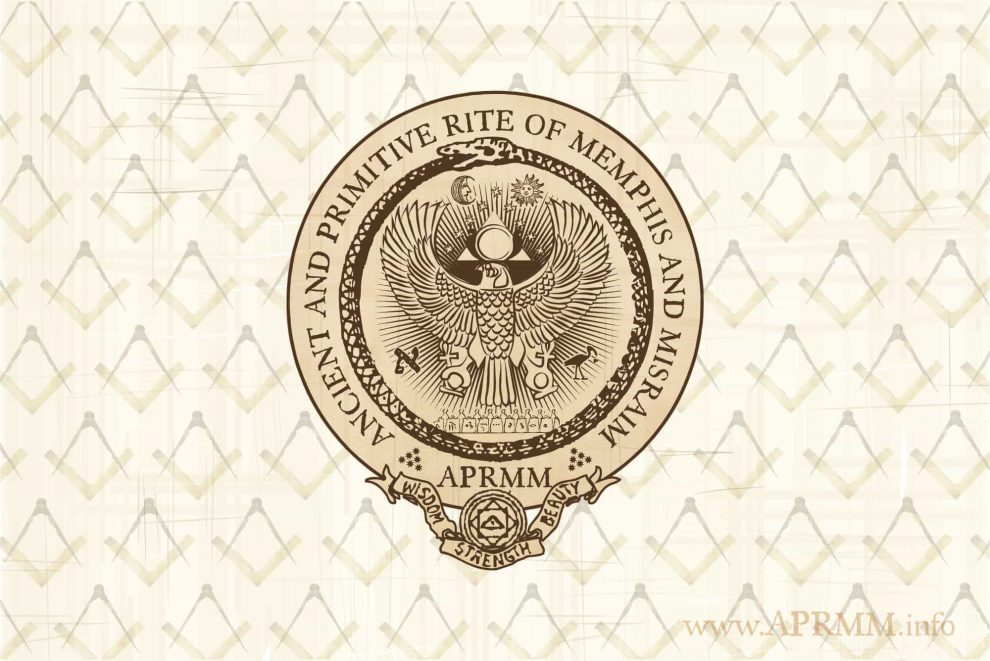 The Order of Ancient and Primitive Rite of Memphis and Misraim, originates from Cagliostro’s Egyptian Rite of Freemasonry presented to the world in 1777. The first organized works in this rite were performed in 1779 in Mitau (former capital city of united Duchy of Courland and Semigallia). In 1785, the first mother lodge of the rite was established in Leon (France).

In 1805, in Milan, upon the basis of the Egyptian Rite and various magical and cabbalistic rituals, was established the Rite of Misraim. Originally it had 77 degrees, and in 1811 it was enlarged till 90 degrees.

In 1815, in Montauban, two learned masons Samuel Harris and Marconis de Negre, have created the rite of Mempis, consisting of 92 degrees. Later the rite was enlarged till 95 and 97 degrees. Besides the first 3 symbolic degrees of masonry, the rite included many higher degrees known in France and Great Britain.

The essence of both Masonic rites is the idea of an ancient initiatic succession starting from ancient Egyptian pyramid builders. After Giuseppe Garibaldi, the post of Gran Hyerophant of the Rite was inherited by an English Freemason John Yarker, after that – Theodor Reuss (cofounder of O.T.O, Ordo Templi Orientis), Gérard Anaclet Vincent Encausse (Papus).

From 1978, the Gran Hyerophant of the order of APRMM is Michael Bertiaux.  It is important to note that APRMM for Europe and the French speaking countries is not an administrative part or a subordinate organization of APRMM. Michael Bertiaux is one of the most famous American occultists, author of Voudon Gnostic Workbook.

Bertiaux was initiated into the Rite of Memphis- Misraim by the Gran Hierophant of one of its branches Hector-Franсois Jean-Maine, the son of Lucien-Francois Jean-Maine – one of the students of Papus, in 1964, in Haiti.

Lucien-Francois Jean-Maine has received his initiation,in 1899, into “Cabbalistic Gnostic Church of Memphis –Misraim” – such was an official name of this line of succession that goes back to Bernard-Raymond Fabré-Palaprat, founder of l’Ordre du Temple (1804). In 2013, Duez transferred his powers to Israeli writer Alexander Rybalka, author of various books on Cabbala and Masonry. Duez keeps the title of Honorary Grand Hierophant.

Currently, the order of APRMM-Europe and FLC supervises the works of National Sanctuaries in many European countries, and also helps to conduct the works of rite of Memphis-Misraim in the USA.

The Order of APRMM-Europe and FLC is a part of the World Association of Egyptian Obediences (WAEO) that unites lodges, sanctuaries and orders working in the rite of Memphis-Misraim, Memphis, Misraim, and the Egyptian rite of Cagliostro.

The Tarot of the Egyptian Masonry of Cagliostro
We use cookies on our website to give you the most relevant experience by remembering your preferences and repeat visits. By clicking “Accept”, you consent to the use of ALL the cookies.
Cookie settingsACCEPT
Manage consent

This website uses cookies to improve your experience while you navigate through the website. Out of these, the cookies that are categorized as necessary are stored on your browser as they are essential for the working of basic functionalities of the website. We also use third-party cookies that help us analyze and understand how you use this website. These cookies will be stored in your browser only with your consent. You also have the option to opt-out of these cookies. But opting out of some of these cookies may affect your browsing experience.
Necessary Always Enabled
Necessary cookies are absolutely essential for the website to function properly. This category only includes cookies that ensures basic functionalities and security features of the website. These cookies do not store any personal information.
Non-necessary
Any cookies that may not be particularly necessary for the website to function and is used specifically to collect user personal data via analytics, ads, other embedded contents are termed as non-necessary cookies. It is mandatory to procure user consent prior to running these cookies on your website.
SAVE & ACCEPT