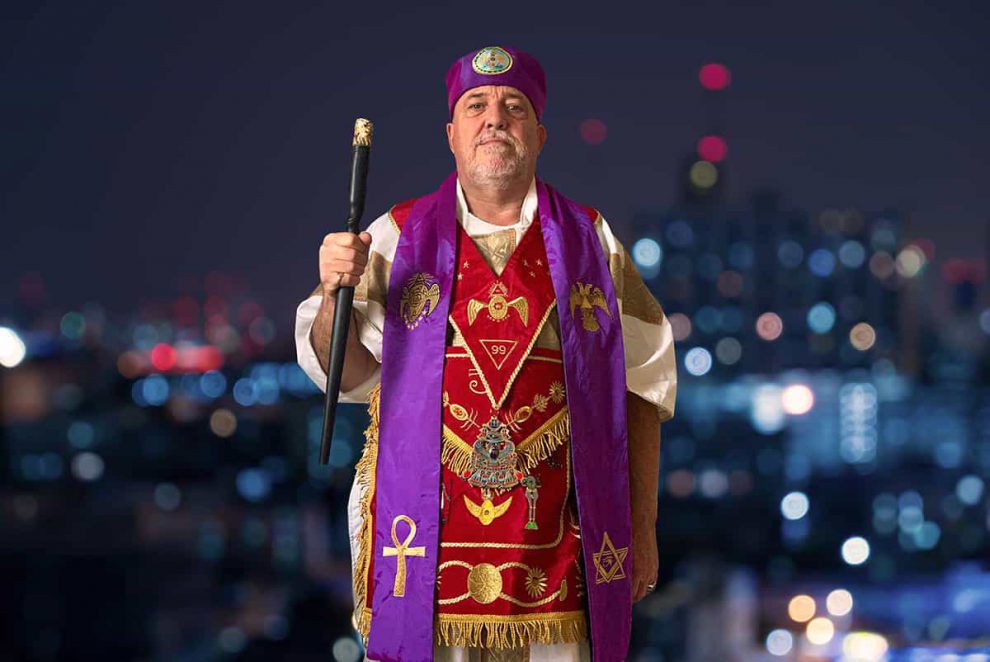 Anniversary of Joel Duez – the Honorary Grand Hierophant of the Order of Ancient and Primitive Rite of Memphis and Misraim for Europe and French language countries.

The most influential esoteric writer of our times and one of the most outstanding contemporary Masons Joel Duez was born on July, 5 1950. After finishing high school he joined French Air Force. When Duez was 22 he got interested in esoteric sciences and commenced his training with the great alchemist Armand Barbault, the elder brother of a well-known astrologer André Barbault.
Joel Duez was inoculated into the Grande Loge de France, and later joined the Rite of Memphis and Misraim (Bertiaux line).
In 1994 the Grand Hierophant of the Rite Michael Bertiaux separated the subsidiary Order for Europe and French speaking countries. Joel Duez was appointed the Gran Hierophant of this Order.
In 1996 Joel Duez received the whole line of succession, including the Order of Elect Priests and the Order of Rose-Cross of the East from André Mauer, the Patriarch of the Gnostic Apostolic and Universal Church.
Joel Duez is one of the most well-known esoteric authors in Europe. He has written more than 25 books. Among them there are “Mystique soufie et kabbalistique”, “
Haute magie opérative et initiatique”, “Traité angéologie démonologie” and others.
All the books written by Duez form the treasury of the contemporary esoteric view. For many years Joel Duez has been acquiring knowledge and the lines of succession of Masonic, Occult and Magic Orders from the best European and American Teachers.
In 2011 Joel Duez joined the World Association of Egyptian Obediences.
In 2013 Joel Duez handed over the chairing of the Order of Ancient and Primitive Rite of Memphis and Misraim for Europe and French language countries to Alexander Rybalka to focus on esoteric work.
For 2017-2018 Joel Duez was installed the Grand Copt (the Honorary Chair, Cagliostro spirit holder) of the World Association of Egyptian Obediences.
Nowadays Joel Duez is developing Masonic theory, working out the whole comprehensive system of Memphis and Misraim rituals.